First of all  Fifth Lake, Gokyo-RI Trekking ,  Everest Base Camp is the highlights. Everest three passes Treks is popular which catches the sceneries of beautiful mountains by crossing the glacier of golden Mountain . Everest Panoramic views Trekking takes in all the highlights . Both in terms of mountain views and into a complete experience of the Everest Region. Specially Sherpa’s can be seen between the trekking and the routes are very amazing.

Everest Three Passes Treks takes in all the highlights both in terms of mountain views . And into a complete experience of the Everest Region. Three passes treks started from the Lukla whereas it will be followed through the bank of Dudh Koshi valley by the climb of the Sherpa valley of Namche Bazaar .we can visit lots of people in Namche and we can learn the traditional culture of Sherpa at all. Namche is the starting point of the trekkers and we will ascend from there to reach our destinations. In the middle of our trekking, we can see the spectacular views of the beautiful scenery whereas top mountains, glaciers rocks, good nature-environment, different kinds of plants & animals, etc.

Our Global Treks & Expeditions guide will meet you at the airport after that you will be taken to the hotel where you prefer to stay. Some hour will give you for the rest and then in the hotel our representative guide will briefing about the activities and the equipment you needed while you are going for the trekkings. Overnight in Guest House.

In the morning you will receive the wake up call from our Global treks & Expeditions Guide. You will catch an early morning flight to Lukla and you will treks forwards to Phakding through walking by the way to Dudh Koshi River around the beautiful scenery from where you can see the different mountains highest point like Mt.Everest, Mt.Nuptse, Mt.Cho Oyu and etc . after reaching to Pakhding hike to the Gumba. Overnight in Guest House.

In the morning you will continue trekking to the Namche Bazaar through the Pine and rhododendron forest . Namche is the big town of Khumbu region. You will cross the Dudh Koshi River at Benkar and see the sight of the peak of Kusum Kanguru. After that you will cross the bridge from where you can reach to the Namche Bazaar. Overnight in Guest House.

The trek will starts through the Thame which is very easy walk through the valley and you will travel to the west on the North south side of the valley. You can have an opportunity to see the great view of the Kongde Ri to the south. After exploring the villages, you will explore Sherpa village and its culture. There is the small tea house between the Thame and the bridges. Thame is the traditional village which have the trekking crowds. Overnight in Guest House.

Early in the morning you will wake up and have a sweet breakfast after that your trek will starts from the Bhote koshi river and you will have the short trek in Marlung. You will ascend to the uphill to the Lumde through the valley. In that valley you cannot see the sherpas because that is the last village. Overnight in Guest House.

Today in the early morning after a hot breakfast you will get some rest because you will ascend more from that point today. After an hour your trek will continue for to climb the top Renjo La Pass from where you can watch the phenomenon view of the Mt.Everest and Mt. Nuptse . Youcan also see the Gokyo lake surrounding by the greenery valley at all.The places took a good capture of photo and the weather. Overnight in Guest house.

Gokyo is the beautiful place for the visitors. All the trekker have the beautiful journey to the enticing Gokyo Lakes which have one of the most amazing view points. Today you will stay in Gokyo and you will have trekking in Renjo La and you can have hike in the lake in order to rejoice the view of nature if you want. Gokyo environment have the best sounding .You can have the spectacular view of the Mt.Everest and Mt. Cho Oyu. If you want then you can visit the fourth and fifth lake their are taken as extra in Gokyo. Overnight in Guest House.

It is an easy way for the trekking to all the trekker. You will walk through the glacier and this is one of the longest glacier in Nepal called Ngozumpa glacier. On the way there is many small glacier which is falling to the lake sand under the beneath there are ice so before the sun set you need to cross the glacier paces, which melts will have a difficulties. From that point you can have the beautiful view of the Himalayas ranges like Lhotse, Cho Oyu, etc. Overnight in Guest House.

You will wake up early in the morning then after you will have some preparation because today you will have the hardest trip of the trek. The trail will leads you the rock which is steep climbing and trail drop down to the bottom of the Cho-La. You can capture the panoramic view of the landscape and from above the mountain the sunlight striking will be appear which make more beauty to all the Himalayas. After that we descend down zig zag to the Thangnak. In the top there are also the Buddhist flags which shows the view more spectacular. Overnight in Guest House.

In the early morning you will take a breakfast after that your trekking will start lately because your trek is very easy to the point. You will walk down to the Lobuche, the surrounding is very attractive and you will reach to the Everest glacier. Overnight in Guest House.

Today your trek will start for the Gorakshep in the glacier. Through the way you will have the spectacular view of the different mountains like Mt Everest, Mt Pumori, Mt.Nuptse etc and on the way you can see the Khumbu glacier. After a few treks, you will reach to the Gorakshep . Overnight in Guest House.

Today you will Hike to the Kalapattar which is in the bottom of the Gorakshep from where you can see all the spectacular views of the high mountains like Mt.Everest, Mr. Pumori, many peaks and others. You will capture the panoramic view of yours too. Then after you will be back to the Lobuche. Overnight in Guest House.

After the Breakfast your trek will continue through the Khumbu glacier and you will continue the river up to the pass which is the highest pass of your treks . Finally you will start your climb for the pass and after the hard climb to the top you will descend to the Chhukung valley. Overnight In Guest House.

In the early morning you will descend through the down valley where your walk will be more easy today. You will reach to the Dingboche which is the Sherpa village, after all you will cross the bridges and river. After reaching to the Tengboche you will visit to the old monasteries which is located at the top of it. Overnight in Guest House.

Again your down walking will start to the Namche through the Rhododendron forest which is very beautiful scenery. On the way you will cross through the bridges and the pine forest through the walk. After reaching the Khumjung you will take some rest and your journey to Namche will start. Overnight in Guest House.

Today you will reach to the Lukla through the Dudh Koshi river in an hour. After crossing an bridges you will be in the Lukla. Overnight in Guest House.

Day-18 Arrive back to Kathmandu

Early in the morning we will be back to the Kathmandu in flight. Above the flight you will see the Himalayan ranges and beautiful scenery. After you reach to Kathmandu you will get some time to visit Thamel area which is most attractive for the foreigner. Overnight in Guest House.

Day-19 Back to your Final Destination

Finally today you will back to your destination. Our Global treks representative will drop you to the airport . 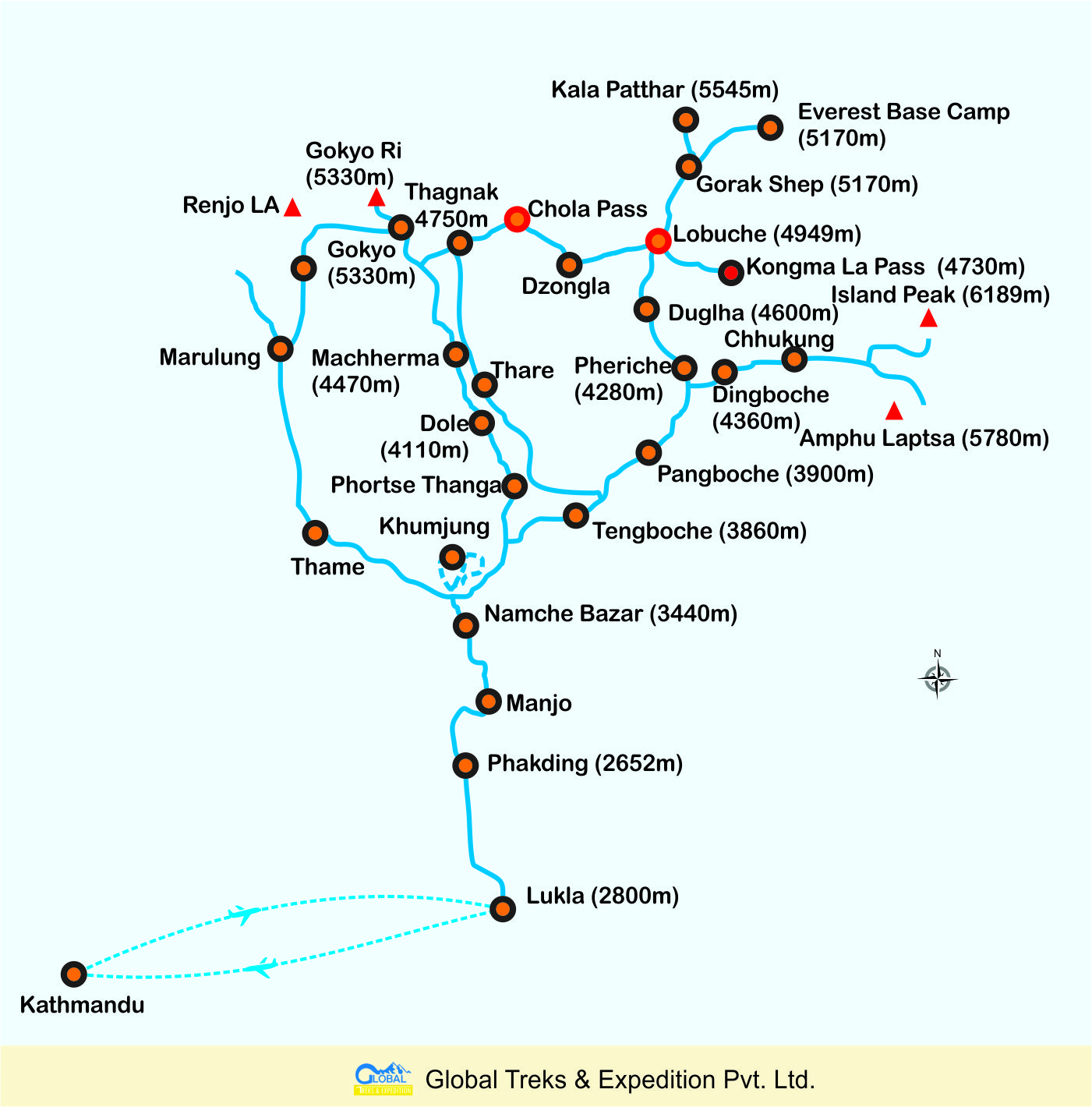